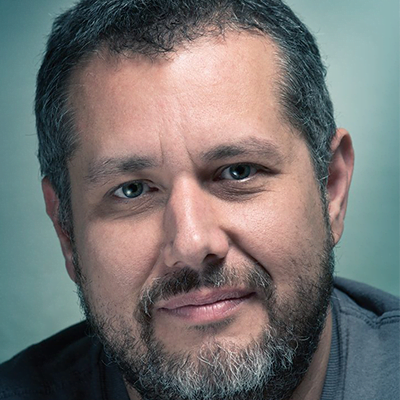 He is an award winning film & television composer, orchestral conductor, music & sound technology academic, audio engineering consultant and live performer. He has clearly been one of the most notable musicians in Slovakia for more than 25 years and as a result has built a strong reputation and following across Europe and further abroad in the USA. Raised in a family of musicians, he studied music theory and classical piano from the age of six and whilst he can play a plethora of instruments and has even been known to perform as a singer, he developed an early passion for the drums and bass guitar. He is a top rated studio musician and recording producer and he has also supported on stage many big stars of the international music scene. As an orchestral conductor, Oskar has worked with many symphony orchestras in the Czech Republic and Slovakia (Prague Chamber Philharmonic, Czech Symphony orchestra, Czech National Symphony, Janáček Philharmonic Ostrava, Philharmonic of Bohuslav Martinů, Zlín, Slovak Radio Symphony Orchestra, Kosice State Philharmonic, Veni Ensemble for Contemporary Music, Young Bratislava Soloists, Capella Istropolitana and many more session and festival ensembles. Interested in music synthesis and recording techniques since childhood, he is the originator of many musical projects of diverse genres and styles. He is a highly skilled conductor of film music recordings and is an original music composer, arranger, orchestrator and is easily adaptable to various musical styles, genres and aesthetics.

1988
admitted to the Bratislava Conservatory of Music as an exceptional talent as a zero-year student of orchestral conducting. During studies co-founded the Chamber Ensemble of Contemporary Music (in collaboration with young composer Marek Brezovsky)

1993
continued studies (orchestral conducting) at the Faculty of Music and Dance at the Academy of Performing Arts, Bratislava, Slovakia, in the class of Maestro professor Zdenek Bilek

1999
graduated with The Slovak State Philharmonic Košice (Slovakia). 2000 offered a scholarship at Berklee College of Music in Boston, USA, where he continued study in composition, film scoring and bass guitar. Whilst studying he widened his skills in counterpoint and composition with Boston based composer professor Armand Qualliotine and he studied bass guitar with legends as Oscar Stagnaro & John Lockwood.

Inspired and led by his father, he has had experience with arranging and studio recording work since childhood (various works for European TV, documentaries, music for TV Commercials, etc.). At the age of 16 he composed a signature theme for the Public Against Violence, winning party after the Velvet Revolution in Czechoslovakia, which signalised the end of communism and socialism. At the age of 19 in1993 as a bass player Oskar recorded with the legendary Slovak singer-songwriter Dežo Ursíny his famous last CD album Príbeh and began cooperation with the Slovak guitarist Andrej Šeban in ASH Band. Then he began his work as a studio musician and music producer which caught the attention of diverse record companies (Universal Music, Sony BMG, EMI) for whom he later worked not only as a studio musician, but also as a music arranger and music producer with many notable European artists (1993 – 2014). Oskar produced and collaborated on more than 70 pop, rock and jazz albums and with musicians from the New York & Boston avant-garde scene (John Shannon, Dan Brantigan, Panagiotis Andreou, Tony Escapa, Mathias Bubblath, Sebastian Noelle, Peter John Stolzman, Melissa Kaplan, Brian Carrigan, Martin Valihora, etc.) As a music producer, he worked with L.A. based singer-songwriter and actress Irene Molloy.