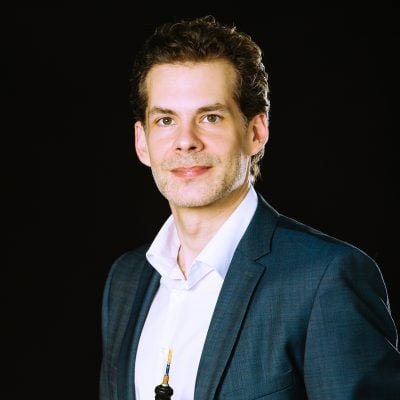 1st solo oboist of the State Opera in Stuttgart and graduate of the prestigious Hochschule für Musik und Theater in Munich.

It was Karol Šikula, his teacher at the music school in Banská Bystrica, who encouraged him to study at the Conservatorium in Bratislava. He won the Slovak Conservatorium Competition three times, and after his first year at the Academy of Musical Art in Bratislava, was accepted at the Hochschule für Musik und Theater in Munich, where he studied with Prof. Günther Passin from 1999 to 2005. In 2001, while studying in Munich, he won the audition for 1st solo oboist at the State Opera in Stuttgart, where he still plays today. In 2009 he was awarded the title of „artis doctor“ at the Academy of Musical Art in Bratislava.

In 2011 he also performed the German premiere of this concerto with the Württembergisches Kammerorchester Heilbronn under the baton of Rubena Gazarian, which was broadcast live by  Deutschland Radio Berlin.

In 2009 the music of Hugo Kauder, who was born in Czechia, inspired Ivan Danko to establish the Hugo Kauder Trio (I. Danko – oboe, R. Lakatos – viola, L. Fančovič – piano), which regularly performs in Germany, Austria, Slovakia and the USA to exceptional critical acclaim. The ensemble has released two CDs (in 2010 and 2015).

His debut album Oboe Ivan Danko (Slovak Radio Records, 2008), which he recorded with his long-time piano partner Ladislav Fančovič, has won multiple international critics awards, as well as the 1st Prize at the International Hugo Kauder Competition in New Haven, USA (2009), where he performed the world premiere of the Concerto for oboe and string orchestra (1926) by H. Kauder.